Last night was amazing because I got to go back into a Women’s 8 sweep racing shell for the first time since college.  The photo above isn’t me…first of all the hairy legs suggest it’s men in the boat, and second they are sculling.  Anyway, I’ve been considering returning to rowing for fun since I saw the U.S. Women’s 8 power it to win the gold in the London Olympics, unfortunately not in person but on an airport television screen at Heathrow.

I contacted the boathouse that is within walking and biking distance from my house, and they said they didn’t have any room for me on their recreational team.  The story is actually more detailed than that, but basically I knew it wouldn’t be a right fit anyway.  So one night earlier this week, I started prowling around the internet and found two other boathouses and and three club rowing teams that practice in the evenings – because I am not getting up at the crack of dawn again like I did in college when we had the long drive down and back to the Chicago River!

Anyway, I got in contact with one of the club teams, and they were so gracious to invite me out for their practice the next day, just to see if I still had the technique and the stamina to do it.  What I discovered is that, yes, I still know what to do both in and out of the boat, but whoa I forgot how many muscles it takes to row!  Even on the practice drills, especially ones where the pace was forced to be slow and controlled, keeping a good rhythm on the seat slide was definitely a workout on the hamstrings.  And let’s not talk about my shoulders when I got off the water.  It was a great workout though.  Such a great feeling when all eight of us were relatively in sync – you could just feel the power in the strokes.  The funniest part was that I looked at a photo today to confirm that I was, indeed, assigned the same seat that I used to row in college – #4 Port.  Strange! 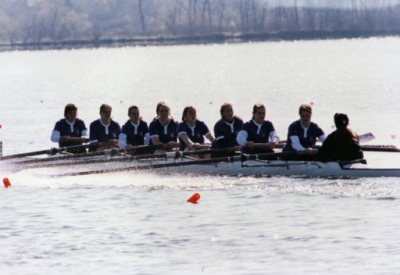 While I may have left the boathouse with sore muscles, blisters, and a little skin rubbed off my leg from inside the boat, these are just the typical war wounds of a rower.  I am looking forward to getting more engaged with this club team, but more likely in the spring since the season is winding down.  I would hate to come to practice and start to build up the oh so beautiful calluses on my hands only to have to stop for 5-6 months.