I remember watching and loving the Anne of Green Gables T.V. series when I was a kid, and I will proudly admit that I still really enjoy it to this day – and own a copy of all three parts.  So when I discovered that my friend had a similar passion for the series, we planned a movie night and got to talking about our mutual desire to one day visit Prince Edward Island (or PEI) in Canada.  With my passion for road tripping, it was clear that I had to make this happen for us because we both had not been to several parts of Eastern Canada and some states up in the Northeast!  I did a little bit of research online about the filming and on PEI activities only to find that most of the actual filming of the movies occurred in the surrounding areas of Toronto, and not on the island.  So, clearly this tour would not be complete without adding in an Ontario stop, plus I could check off one more province on my Canada to-do list.  Here is Part 1 of the All Things Anne Tour from Toronto.  Part 2 in PEI will come soon after.  (Too many photos!)

Here are my three primary resources for organizing the filming location and the All Things Anne Tour:

From Toronto, we spent one day traveling out to eastern Toronto suburbs to visit two heritage villages.  First up, Doon Heritage Crossroads in Kitchener is a collection of historic and replica buildings that have been organized to form a small late-19th/early-20th century village.  We watched the Anne of Green Gables sequel that night when we got back to the hotel and immediately recognized some of the buildings, especially when Anne goes in to town to visit the Post Office, then when she learns she has won the Rollings Reliable Baking Powder essay contest.

The Dry Goods and Grocery Store was used as Lawson’s General Store in the second movie.  You can see it on village panning shots as well as the interior during the contest announcement.

The Tailor Shop/Post Office was, not surprisingly, used as the post office (tailor shop on the left kept the door closed with the window redressed) in the sequel. 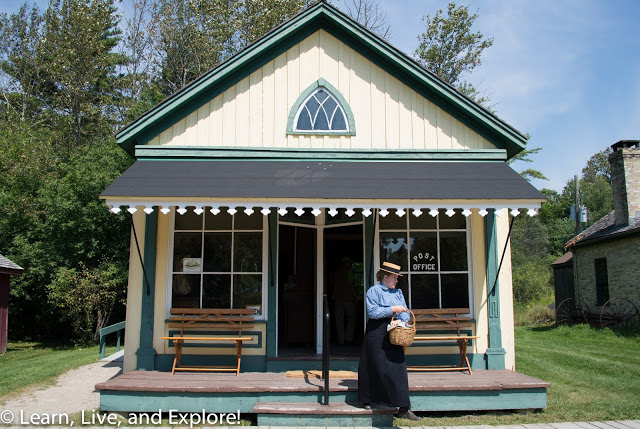 The Seibert House was used for Rachel Lynde’s house in the first and second films.

When it comes to recreating the memorable scenes from the movie, I’d have to say that Westfield Heritage Village in Rockton was the better location.  Most recognizable is the Railway Station that was turned into Bright River Station, where Anne imagined spending the night in the cherry tree while waiting for Matthew to pick her up.  The actual bench used is now inside the station. 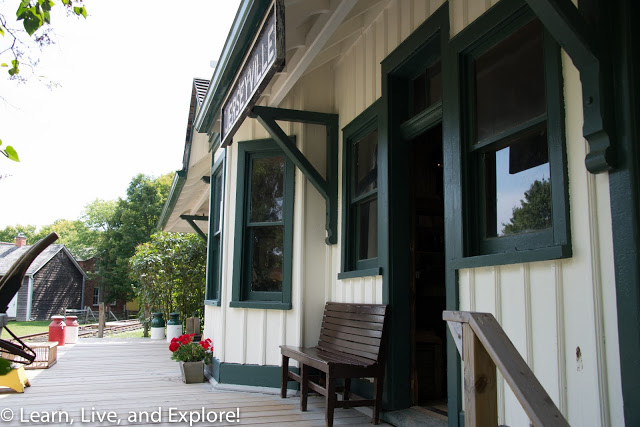 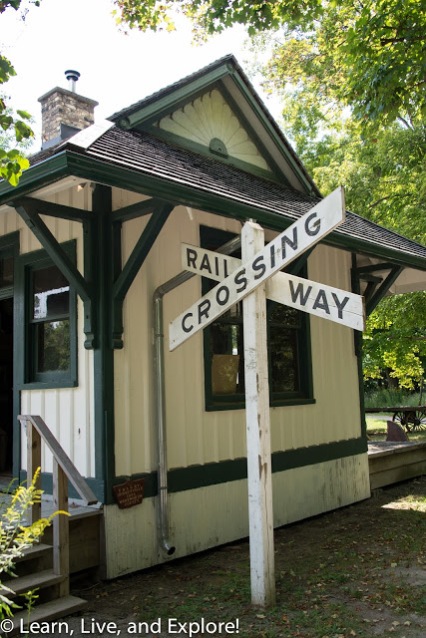 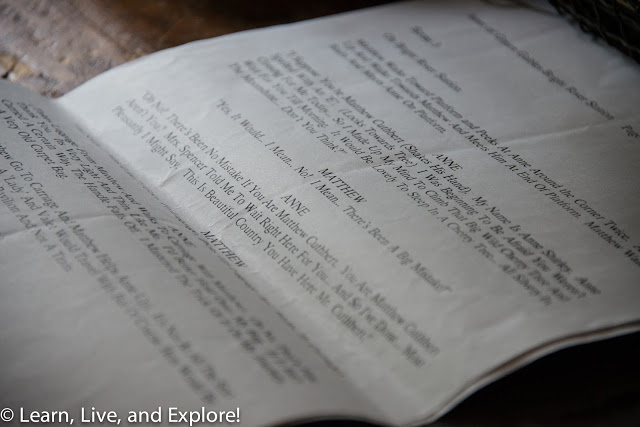 The General Store has the window that contained the blue dress with puffed sleeves that Matthew (eventually) bought for Anne to wear to the Christmas Ball.  The interior was used as Lawson’s General Store in the first movie.  “Twenty pounds of brown sugar!” – Marilla Cuthbert 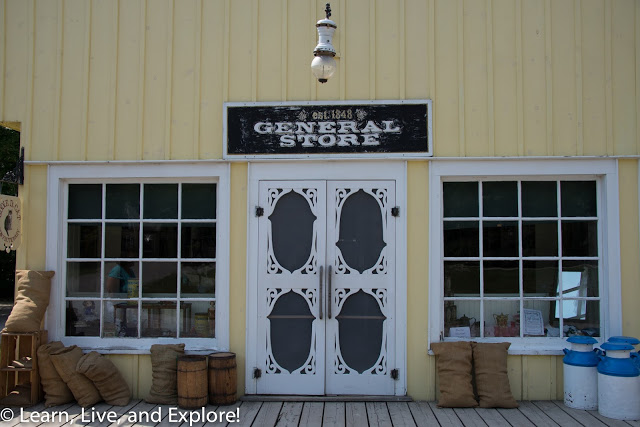 Next door at the McRoberts Dry Goods Store, you can see a re-interpretation of the puffed sleeved dress on a dress form. 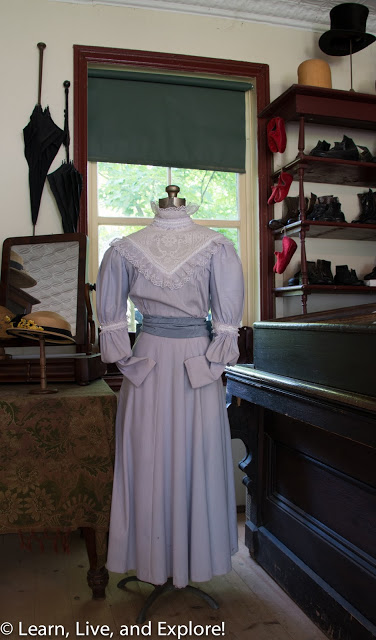 Scenes from every Anne film were filmed at Westfield, so you may recognize the buildings in the background as you watch, like when Gilbert drives Anne home from the village in the first film. Interior scenes from the first Anne film were shot here – the orphanage with her imaginary friend, Katie, in the window was upstairs in the Dry Goods Store and Hammond House was shot in the D’Aubigney Inn.  The Moutsberg Church was used for Anne and Gilbert’s wedding in the third film, as well as Matthew’s funeral in the cemetery.  Finally, the sawmill was used as Hammond Sawmill in one the first scenes of Anne of Green Gables.

Heading to the western side of Toronto, we were able to stop at three of the popular filming sites, then spent the rest of the time learning more about Lucy Maud Montgomery’s married life in Leaskdale on a private tour of the home (or manse) in which she lived with her husband, just down the street from the church where he preached.

First, we stopped very briefly in front of Butternut Farm (7501 Steeles Avenue) because it is now private property.  This farmhouse from the mid-19th century was used for Green Gables exterior shots in the films.  The foliage is quite overgrown now, as is to be expected over the 25 plus years since production.  Nearby, though we did not look for them, are a lane that was used in the movie and Dolly’s muddy field.

Next, we traveled to outside Gormley to Century Mill Lumber (3993 Stouffville Rd.) to get a peek at the infamous bridge where Gilbert proposed twice, amongst other classic scenes like Anne’s “Lady of Shalott” sinking. The present bridge is a replacement, and even so, it looks like this one is not weathering very well. Once I saw the significant lean midway across, I opted to not climb to far onto the bridge. A photo can be taken just up the pond, or head over to the rear parking lot of the church to access the other side of the pond without risking it on the bridge. 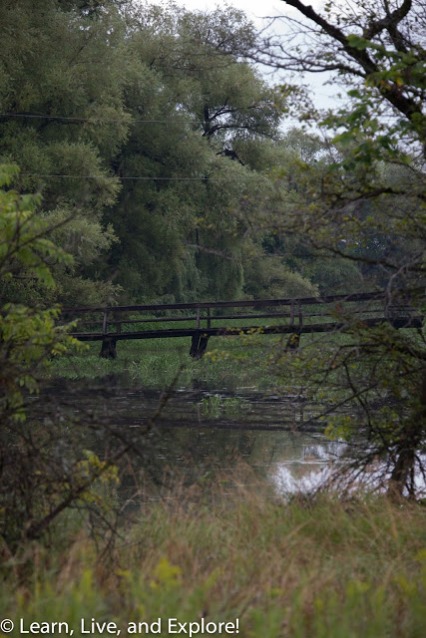 Just down the street is Bruce’s Mill Conservation Area (3291 Stouffville Rd.). You will need to turn into the driveway, and just before the entrance gate to the right is the house used for the Barry family in the first film. This is private property now.

On the way to Leaskdale, we stopped at the train station where L.M. Montgomery disembarked from her journeyby train from PEI as Mrs. Ewan McDonald.  It is considered architecturally distinct with its “witch’s hat” roof. (19 Railway St, Uxbridge) 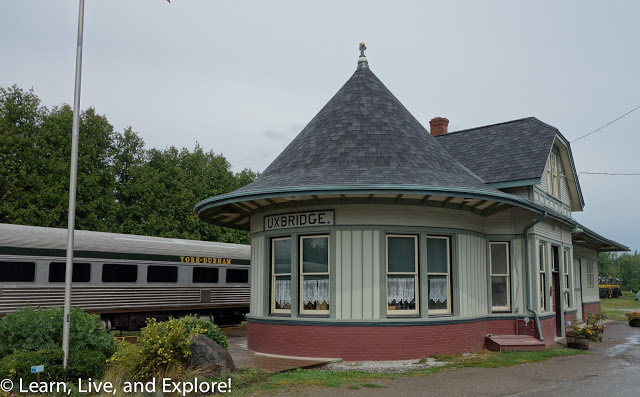 The L.M. Montgomery Home and Museum is owned by the Lucy Maud Montgomery Society of Ontario.  We arranged a private tour in advance because we were arriving at an off-hours time.  In the basement of the church at 11850 Regional Road 1 in Leaskdale near Uxbridge, we explored some of the author’s artifacts and watched an introductory film.  After touring the church, we went down the street to the Manse, which has been painstakingly restored by the Society from a poorly maintained public housing building to its present condition, based on L.M. Montgomery’s photos and journal entries where she described in precise detail all of the facets of her lovingly decorated rooms.

L.M. Montgomery had published Anne of Green Gables in 1908 and Anne of Avonlea in 1909 while she was still living with her grandmother on Prince Edward Island.  When her grandmother passed away, she married Reverand Ewen McDonald and moved to his perish in Leaskdale, Ontario.  They lived in this house for fifteen years and had three sons, though one was stillborn.  “Maud” wrote 11 of her 22 novels while in this home, including “Anne of the Island” and “Anne’s House of Dreams.”  In 1926, the family moved to Norval, where Rev. McDonald’s severe depression (or melancholia as she described it) became much worse to where he was asked to leave the perish.  Fortunately, with her success as an author, the family had more than enough money to retire in Toronto.  In the interior manse photo below, you can see replicas of Gog and Magog, two porcelain Staffordshire dogs that are referenced in “Anne of the Island.”

There are several other L.M. Montgomery and Anne sites that we did not have time to visit while in the Toronto region.  If you’re interested, I encourage you to check out the websites I cited at the beginning of this post.  Now on to Prince Edward Island….!!!

By the way, my friend and I attempted to recreate some scenes from the film.  Funny, right?